116g individual found in 2020 by Andrzej Owdzarzak. With digital in-situ photos and gps point. Sold with label/certificate of authenticity.

The Morasko meteorite nature reserve (Polish: Rezerwat przyrody meteoryt Morasko) is located in Morasko, on the northern edge of the city of Poznań, Poland. It contains seven meteor craters. The reserve has an area of 55 hectares (136 acres) and was established in 1976.

The largest of the seven craters on the reserve has a diameter of about 100 metres, and is about 11 metres deep. Five of the craters, including the largest, contain lakes. The date of formation is estimated to be about 5,000 years ago (Holocene).

The first meteorite found at Morasko was uncovered in 1914 by German soldiers working on the construction of a military fortification. Since then, many further fragments have been found, including one weighing 78 kg in 1956.

In September 2006, Krzysztof Socha, a meteorite-hunter from Kielce, working for the Geology department of the city’s Adam Mickiewicz University, uncovered with the aid of a metal detector a meteorite weighing 164 kg. At the time this was the largest meteorite discovered in Poland. Analysis showed that the meteorite contained, apart from iron-nickel alloy, a small quantity of silicates (pyroxenes) not occurring on Earth.

Morasko is an iron meteorite IAB. 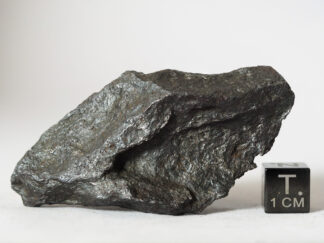 You're viewing: Morasko (iron IAB) – 116g 237.50 €
Add to cart
We use cookies on our website to give you the most relevant experience by remembering your preferences and repeat visits. By clicking “Accept”, you consent to the use of ALL the cookies.
Cookie settingsACCEPT
Manage consent