The meteorite of Bouvante is a monomict eucrite. It is a basaltic rock made of 45% plagioclase, rich in calcium.
The high calcium content makes the crust very shiny. Its estimated age is 4.51 billion years and the duration of exposure to cosmic rays (CRE) is 7.1 million years.

Letter written in 1991 by Mr Luc Ezingeard, the finder, to Alain Carion :
“On july 30, 1978, in the municipality of Bouvante-le-Haut, Drôme department, at 585m altitude (Michelin map 77, fold 13), having a picnic with my family in a meadow, my attention was drawn to the following facts : on the ground, a square patch of 25/25, the grass in the vicinity seemed burnt. This hole to a depth of 50-60 centimeters contained a kind of rounded pebble, weighing  8,300kg. The interior of this stone is grayish, the crust is glossy black, like a varnish. I have long searched the area around it for another similar discovery in vain. I removed that strange object from the ground and subsequently brought it to the Municipality of Saint-Jean-en-Royans (my workplace). Very quickly, I realized that it was a meteorite. The mayor of Saint-Jean-en-Royans informed his council of the discovery, but has not been the subject of debate.
This find remained exposed on a chimney in the hall of the City Council for several months, and was used for lessons for students of the schools of Saint-Jean-en-Royans. The meteorite was acquired by the Natural History Museum in January 1980. […]” 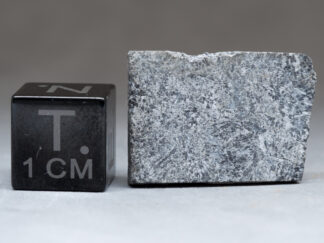 You're viewing: Bouvante – 1.22g $ 320.00
Add to cart
We use cookies to ensure that we give you the best experience on our website. If you continue to use this site we will assume that you are happy with it. Nous utilisons des cookies pour vous garantir la meilleure expérience sur notre site. Si vous continuez à utiliser ce dernier, nous considérerons que vous acceptez l'utilisation des cookies.Ok