Fragment (about 1.5 x 1mm) sold in a box with label/certificate of authenticity (mine and the former owner also). The latest UK fall and the only carbonaceous from UK !    Extremely rare, one of the few fragment for sale on the market currently.

History: (L. Daly, Glasgow; K. Joy, Manchester; N. Stephen, Plymouth; A. King, NHM; R. Greenwood, OU): A bright fireball was observed blazing across the sky, travelling from approximately W to E over the United Kingdom at 21:54 (UT) on 28 February 2021. The fireball entered Earth’s atmosphere at ~14 km s-1 and was recorded by 14 stations operated by the six meteor camera networks comprising the UK Fireball Alliance (UKFAll). It was also caught on numerous dashboard and doorbell cameras. There were over 1000 eyewitness accounts from across the entire UK, as well as Ireland and northern Europe, with reports of a sonic boom in the local area. The following morning, the Wilcock family discovered a pile of dark stones and powder on their driveway in the town of Winchcombe, Gloucestershire. Material from the impact site was collected into plastic bags that morning, revealing a small dent in the tarmac. The family reported their find to the UK Meteor Observation Network (UKMON) and over the next two days continued to recover stones and powder from the driveway and front lawn (total mass 319 g). In addition, one stone (17 g) and smaller fragments (~3 g) were found on a neighbor’s driveway. On 3 March, Richard Greenwood (OU) and Ashley King (NHM) visited the area, confirming the meteorite fall and transferring it to NHM. Within days of the fall, further stones (total mass 31 g) were recovered from properties in the nearby village of Woodmancote. On 6 March, Mira Ihasz (Glasgow) found a 152 g stone on Rushbury House Farm during an organized search of farmland to the west of Winchcombe by the UK planetary science community. At this stage, all meteorites were collected without any significant rainfall in the area. On the 16th March several small stones and fragments (total mass 16 g) were retrieved by Sarah Farrelly, Ieuan Spencer, Sheeraz Naqvi, Benjamin Mayne, Daniel Skilton and Dan Kirk from a solar park to the south-west of the village of Bishop’s Cleeve. The fall centroid is located at 51.945°N, 2.032°W. Total collected mass is 548 g

Physical characteristics: (N. Almeida and H. Bates, NHM; R. Findlay, OU): Dark gray-to-black stones and powder. The largest 152 g stone is completely fusion-crusted, but split into two pieces (49 and 103 g) in the field due to its highly friable nature. All other stones are <14 g and many have a partial fusion crust that ranges from matte black to red/brown in color. One stone was described as having a “compost-like” smell upon powdering.

Petrography: (M. Suttle, S. Russell, A. King, T. Salge and J. Najorka, NHM): Initial visual inspection of stones indicated at least two distinct lithologies, one dark gray with visible white flecks and another that is darker and often featureless. Optical microscopy and SE/BSE imaging of two probe mounts reveal the meteorite to be heavily brecciated with multiple lithologies present. In general, the matrix is fine-grained and dominated by Fe- and Mg-bearing phyllosilicates. Tochilinite-cronstedtite intergrowths (TCIs) are abundant in some lithologies. Isolated olivine grains (rounded, euhedral, or angular in shape) are present in the matrix, and metal is rare. In one of the probe mounts, chondrules (mean size 145 µm, n = 231) comprise 10 area% and are typically heavily altered, with little anhydrous silicate remaining. The chondrules and chondrule pseudomorphs retain well-developed fine-grained rims (FGRs). Intact CAIs are rare and extensively altered. Several lithologies are carbonate-rich, with individual grains up to ~200 µm in size. Small Fe-sulfide grains appear to be relatively abundant in all lithologies, and magnetite framboids have also been observed. The main phases identified from a powder XRD pattern of a small aliquot of the meteorite include Fe-Mg serpentines, tochilinite, olivine, calcite, and magnetite.

Classification: The mineralogy, petrography and bulk oxygen isotopic compositions are consistent with a CM2 classification, although chondrule sizes are towards the lower end of the CM range and more altered lithologies (CM1/2) are also present.

Specimens: The type specimen weight is 535 g (NHM), and 13 g remains with the finders for donation to other national institutions. 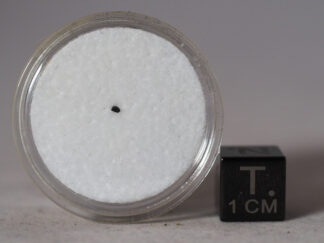 You're viewing: Winchcombe (CM2) – micro 128.25 €
Add to cart
We use cookies on our website to give you the most relevant experience by remembering your preferences and repeat visits. By clicking “Accept”, you consent to the use of ALL the cookies.
Cookie settingsACCEPT
Manage consent