Small fragment of this rarity.  Sold with label/certificate of authenticity.  Price is for each small fragment in a collection box (the photo presents one of those. The others are about same size, tiny – about 1 mm).  The box will be randomly picked up in the stock.

May 14, 1864, at 8pm, a meteor goes through the french sky. It is observed in the Eure department, in Bordeaux or even in Agen. It flies over the city of Montauban before exploding violently at 10 kilometers between Nohic and Monbéqui, from a west-northwest – east-southeast axis. Numerous fragments are recovered. The Orgueil meteorite is one of the first carbonaceous chondrite ever found and its scientific interest is considerable. Shortly after its discovery, a controversy arose as some scientists believed to have detected traces of extraterrestrial fossil life in it. This was obviously a hoax.
In 2006, M. Gounelle, P. Spurny and P.A. Bland published a paper in Meteoritics and Planetary Science about the path of the Orgueil meteorite. They found an entry point into the atmosphere at an altitude of 70 km (longitude 0.26° W, latitude 44.29° N) and an explosion point at an altitude of 19 km (longitude 1.34°E, latitude 43.89°N) after a 150 km course in the sky. The calculation of the orbit indicated that the Orgueil meteorite is from a cometary origin !
Finally, in 2011, the analysis of cometary fragments brought back to Earth by the Stardust mission and whose isotopic composition of hydrogen were close to that of Orgueil has confirmed these conclusions. 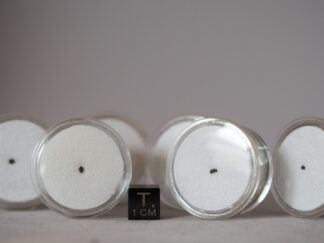 You're viewing: Orgueil (CI1) – small fragment 45.00 €
Add to cart
We use cookies on our website to give you the most relevant experience by remembering your preferences and repeat visits. By clicking “Accept”, you consent to the use of ALL the cookies.
Cookie settingsACCEPT
Manage consent