Wood fragment from the Tunguska phenomenon.

Wood fragment from the Tunguska phenomenon. Sold with label/certificate of authenticity.

The Tunguska event was a large explosion that occurred near the Podkamennaya Tunguska River in Yeniseysk Governorate (now Krasnoyarsk Krai), Russia, on the morning of 30 June 1908 (NS). The explosion over the sparsely populated Eastern Siberian Taiga flattened an estimated 80 million trees over an area of 2,150 km2 (830 sq mi) of forest, and eyewitness reports suggest that at least three people may have died in the event. The explosion is generally attributed to the air burst of a meteoroid. It is classified as an impact event, even though no impact crater has been found; the object is thought to have disintegrated at an altitude of 5 to 10 kilometres (3 to 6 miles) rather than to have hit the surface of the Earth.

From recent studies, it may be a 65 meters in diameter meteor which explosed over the area. 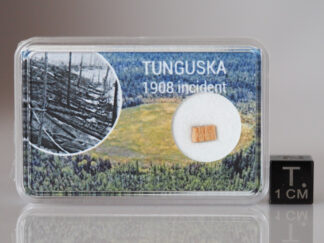 You're viewing: Tunguska wood 19.00 €
Add to cart
We use cookies on our website to give you the most relevant experience by remembering your preferences and repeat visits. By clicking “Accept”, you consent to the use of ALL the cookies.
Cookie settingsACCEPT
Manage consent