0.264g fragment of this shergottite.

0.264g fragment. Sold in collection box with label/certificate of authenticity.

A meteoritic body entered the earth’s atmosphere in the south-east skies of Tata, Morocco, On Sunday July, 18th, 2011 at 2 o’clock in the morning. Its interaction with the atmosphere led to brilliant light flashesaccompanied with detonations. The apparent magnitude of the fireball was brighter than -20. A large number of fragments survived the fireball phenomena. The saharian nomads living in the surrounding region then came together for searching the debris of this extraterrestrial rock. The first fragment had been discovered at the end of December. About a hundred persons came to the region of Tissint (Tata, Morocco) and about fifty fragments had been collected by the nomads, traders and hunters with some knowledge about extraterrestrial rocks. This extraterrestrial debris became a source of revenue and this explains the trade value of these rocks, which appears to be reached 1000 dollars for one gram, to be paid directly in cash in the desert.Ahmed Sghiwar, a nomad who found a small block of 5 grams in the region, contacted at the beginning of January 2012 the author, Prof. Ibhi Abderrahmane, scientist and collector of meteorites at the Ibn ZohrUniversity in order to inform him about the findings of freshly fallen meteorites in the region of Tata. Immediately a scientific expedition formed by 2 teaching researchers and two student of the Geo-heritage and Geo-materials Science Laboratory went to the fall area equipped with a modern navigation and detection instruments. The member of this team succeeded in collecting debris of this Martian meteorite and information on the fall. We present in this paper results of systematic search made over a period of one month to collect the data of this meteorite which has been named as Tissint, where a large number of fragments were found within a seven months of the fall 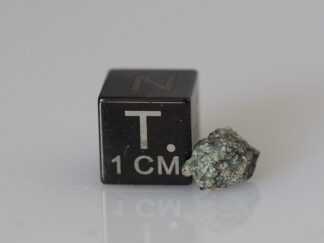 You're viewing: Tissint (Mars) – 0.264g 171.00 €
Add to cart
We use cookies on our website to give you the most relevant experience by remembering your preferences and repeat visits. By clicking “Accept”, you consent to the use of ALL the cookies.
Cookie settingsACCEPT
Manage consent