10.69g fragment. Sold in a collection box with label/certificate of authenticity and a vial of Tatahouine strewnfield sand.

The meteorite of Tatahouine fell june 27, 1931, 4 kilometers northeast of the city then called Foum Tatahouine. French soldiers from an Infantry Battalion of Africa quickly recovered more than 10 kilograms of fragments that were sent to the National History Museum of Paris. The famous geologist Lacroix went there and published a study on the fall, indicating the location of three small craters where most specimens were discovered. No more extensive research was undertaken on site until 1994, when Alain Carion found the study of Lacroix in the archives of the National Library of France in Paris. He went to Tatahouine and recovered a large number of fragments. Today, the site has been transformed into a garbage dump and houses are built on the edge of the area, making it a place nearly impossible to search.

Recently, a stone of more than 1 kg, with crust, was discovered while digging the foundations of a house. It is considered as the main mass of the fall.

In 1999, the CEA (Atomic Energy Commission) analyzed the sand of Tataouine and discovered that the carbonate globules found in the sand but also in the meteorite of Tataouine were similar to those found in the Martian meteorite ALH 84001, discovered in Antarctica. These are the smallest organisms on Earth and they contaminated the rocks that were on the surface. They were not in any of extraterrestrial origin as some claimed.

For all fans of Star Wars, you probably know that the name of the planet Tatooine was inspired by the city of Tatahouine (who also wrote Tataouine). 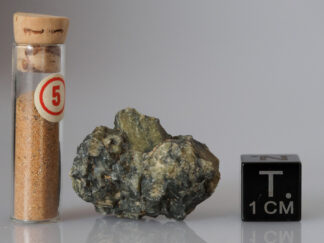 You're viewing: Tatahouine (diogenite) – 10.69g 299.00 €
Add to cart
We use cookies on our website to give you the most relevant experience by remembering your preferences and repeat visits. By clicking “Accept”, you consent to the use of ALL the cookies.
Cookie settingsACCEPT
Manage consent