Stevns Klint is a geological site that illustrates the impact of an asteroid that created the global mass extinction of species some 65 million years ago, known as the Chicxulub event.

These cliffs show high-quality exposure of the Cretaceous-Tertiary (K/T) boundary section: the border is visible as a reddish layer in the strata. In 1980, a scientific team started to study the fish clay at Stevns Klint and found large traces of iridium, commonly found in cosmic material. This gave rise to a new theory that mass extinction wasn’t caused by extensive volcanism in India, but was due to the impact of a giant asteroid.

The cliffs of Stevns Klint are also rich in fossils. There is a significant fossil record before and after the K/T boundary layer. 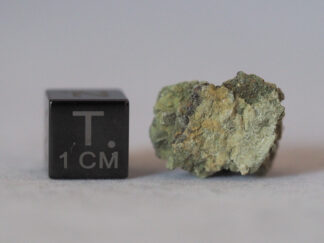 You're viewing: Stevns Klint (KT boundary) – 1.69g 15.00 €
Add to cart
We use cookies on our website to give you the most relevant experience by remembering your preferences and repeat visits. By clicking “Accept”, you consent to the use of ALL the cookies.
Cookie settingsACCEPT
Manage consent