Evidence for a bolide impact close to Ullapool was published by a combined team of scientists from the University of Oxford and the University of Aberdeen, in March 2008. Additional evidence for an impact origin for the deposit comes from the identification of the mineral Reidite as lamellae in Zircon grains, indicating pressures of at least 30 GPa.

The evidence is centred on Ullapool, a harbour town on Loch Broom in the Ross and Cromarty district of the Highland council area of northwest Scotland. It may have been the largest known bolide impact ever to strike what are now the British Isles. The impact, which has been dated to about 1.18 Ga, melted rock at the site and left parallel shock fractures in quartz and biotite and a tell-tale trace of iridium. Centered on the impact crater, a wide ejecta field has been traced, some 50 km across, forming the Stac Fada Member within the Stoer Group of the Torridonian. The affected layer of rock, which on land stretches from Gairloch in the south to Stoer in the north is six to 22 metres thick. Before 2008, this anomalous unit was unsatisfactorily credited to an isolated instance of volcanism.

The crater, preserved under sedimentary layers of sandstone, is currently presumed to either lie to the west under the Minch, the waterway that separates the Isle of Lewis in the Outer Hebrides from the north-west Highlands of Scotland, or to be the cause of the Lairg Gravity Low, beneath the Moine Thrust Belt to the east. It has been estimated that the crater is about 10 km across. The impact would have created a blast with the force of 145,000 megatons and that the shock wave would have created winds of 420 km/h as far away as the site of modern Aberdeen. 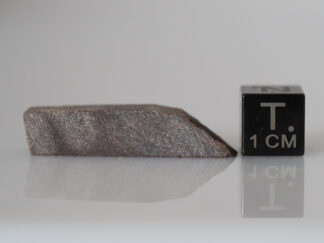 You're viewing: Stac Fada (impactite) – 3.9g 18.00 €
Add to cart
We use cookies on our website to give you the most relevant experience by remembering your preferences and repeat visits. By clicking “Accept”, you consent to the use of ALL the cookies.
Cookie settingsACCEPT
Manage consent