4.4g part slice with crust
Sold in membrane box with label/certificate of authenticity

A very bright meteor appeared in the southeast of Finland on july 12, 1910. It moved from south to north and ended at an altitude of 30 km. Some witnesses saw the meteor to fragment before disappearing. Others indicated that they had heard a loud noise like a whistle a few minutes later. After the fireball had gone out, they heard two violent explosions and thunder. The meteorite fell ten kilometers southwest of Mikkeli (named St. Michel at that time).

The farmer Daniel Honkanen was in his field when the fall occured. He saw a black object falling before him. It was a meteorite ! He and the woman who accompanied him saw a hole in the field. It was two feet deep and inside they found a stone about 7 kilograms (the exact total weight of the pieces recovered is 6802 grams). Later, another hole meteorite containing 10 kilograms of fragments (9650 grams for the total pieces precisely) was found two kilometers away, in the forest. 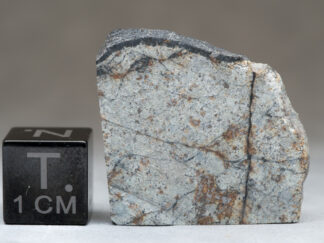 You're viewing: St. Michel (L6) – 4.4g 495.00$
Add to cart
We use cookies on our website to give you the most relevant experience by remembering your preferences and repeat visits. By clicking “Accept”, you consent to the use of ALL the cookies.
Cookie settingsACCEPT
Manage consent