Individual – 16.31g – found by me
Sold with label/certificate of authenticity.

20°31’N, 56°40’E
Found in march 2000
L5 chondrite
Total mass > 450 kg
Specimens in collection : about 250 g
SAU 001 in one of the most important meteorite fall in
Oman and even in the world. Thousands of specimens were
found, from several milligrams to more than 10 kilograms
individuals since the area was searched. The SAU 001
are relatively fresh but most are covered partly by rust
and also an iridescent crust on some specimens. They are
recognizable because of these characteristics. Fragments
of crust were analyzed to determine the terrestrial age of
this meteorite, that means the date of fall.
SAU 001 fell on Earth 5500 ± 1300 years ago. 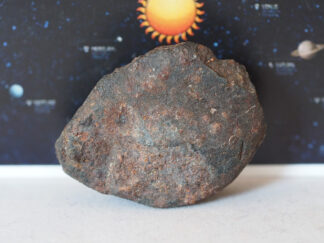 You're viewing: SAU 001 (L5) – 16.31g 48.00 €
Add to cart
We use cookies on our website to give you the most relevant experience by remembering your preferences and repeat visits. By clicking “Accept”, you consent to the use of ALL the cookies.
Cookie settingsACCEPT
Manage consent