0.294g part slice of this excessively rare carbonaceous chondrite. Ornans is the type specimen of CO meteorites. Sold in a collection box with label/certificate of authenticity.

On July 11, 1868, around 7.15 pm, the inhabitants of Ornans and surrounding heard four shots separated by relatively long intervals. Then ten successive detonations briefly. A whistle was also heard in many villages around : Chantrans, Vuillafans, Cléron, Montgesoye, so that the inhabitants believed that the Prussians bombarded Salins. 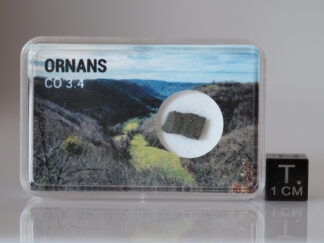 You're viewing: Ornans (CO 3.4) – 0.294g 441.00 €
Add to cart
We use cookies on our website to give you the most relevant experience by remembering your preferences and repeat visits. By clicking “Accept”, you consent to the use of ALL the cookies.
Cookie settingsACCEPT
Manage consent