Impactite. 5.91g fragment. Sold  with a label/certificate of authenticity.

The impacting body was a metallic asteroid containing iron and nickel. It has been identified as a group I octahedrite and as an IAB meteorite with a size of about 15 m (49 ft).

The impact has produced rocks such as impact glass, coesite and shocked quartz; some rocks were completely melted during the impact and others were turned to glass. Impact-generated rocks formed mostly from granite and meteorite material. They are mostly found at the east-southeast side of the crater, with lesser amounts on its inside.

Only a few or no fragments of the meteorite have been recovered. Given the proximity of the crater to an old road, this may be due to traders and herdsmen removing meteorite fragments but it may also be due to the metals being oxidized over time. They include rocks called “iron shale”, they are magnetic indicating their origin in the meteorite. 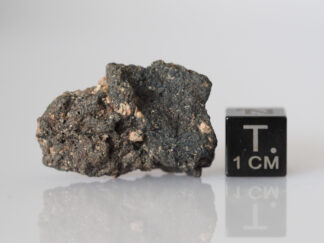 You're viewing: Monturaqui (impactite) – 5.91g 38.00 €
Add to cart
We use cookies on our website to give you the most relevant experience by remembering your preferences and repeat visits. By clicking “Accept”, you consent to the use of ALL the cookies.
Cookie settingsACCEPT
Manage consent