0.082g part slice sold in a collection box with label/certificate of authenticity. One of the hardest french meteorite to get !

“On July 14, 1845, around 3 o’clock in the evening, following a detonation similar to a clap of thunder, a stone was collected in the hamlet of Vivionnière, commune of Teilleul (Manche), which, according to the two witnesses, seemed incandescent at the moment of its fall.
Thanks to the kindness of Mr. Rétout, professor at the college of Mortain, and that of his pupil Mr. Dary, to whom I would like to address my thanks here, I received all of this stone, of which Mr. Fouqué kindly gave me a first sample, indicating its source.
The Teilleul meteorite, whose size exceeds that of a fist, roughly presents the shape of a very flattened pentagonal prism, whose edges are slightly blunted. Its weight is about 780 grams.
As always happens, this meteorite is completely enveloped in a blackish crust, which formed on its surface, while in a state of incandescence it passed through the earth’s atmosphere.” Gabriel Auguste Daubrée (1814-1896). 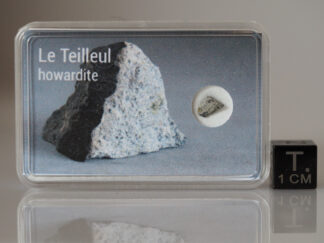 You're viewing: Le Teilleul (howardite) – 0.082g 105.00 €
Add to cart
We use cookies on our website to give you the most relevant experience by remembering your preferences and repeat visits. By clicking “Accept”, you consent to the use of ALL the cookies.
Cookie settingsACCEPT
Manage consent