In the afternoon of July 23, 1872, a very loud bang was heard near Tours. At 5.20 pm, an inhabitant of Ile-Bouchard saw passing above him a burning bolide. The meteor seemed to separate into two burning bodies. In fact, many meteorites fell and were discovered : At Lancé, around Authon and around Prunay.

On July 23, between 7 and 11 am, several stormy clouds had crossed the Indre-et-Loire department, and electric events had reached a considerable intensity in the canton of Ile-Rouchard. At 5.25 pm, the sky had no trace of stormy clouds throughout the whole department; the sun was shining, barely veiled occasionally with light cirro-cumuli; the breeze blowing from the storm south-southwest, had completely stopeed, when a loud bang, followed by a prolonged roll, was heard in the direction of the northeast. Many people, even under the influence of stormy memories of the morning, believed it was thunder. I then found myself on the junction channel from the Cher to the Loire river. In the isolation and complete silence, this detonation like that of a cannon of large caliber, firing at a distance of 3 km, which would have been followed by a rolling fire of musketry, lasted for 30 to 40 seconds. Although this explosion had on me a strange feeling of constriction in the cardiac region, a feeling that I had never experienced and that I first attributed to a knockdown in return, the appearance of the sky excluded any electric shock state. At Tours, where the explosion was heard, there was many talks about exploding powder keg, mines, locomotives, and the most varied rumors circulated in the public.

The next day, the information of our correspondents began to reach me: the explosion was heard accross the department, but its intensity was increasing as we approached the northeast limits; In the towns of Monthodon, Neuville, Châteaurenaut, Beaumont-la-Ronce, Dammarie, people were terrified by a terrible explosion, shaking the ground and houses; we talked of a little cloud of smoke that had occurred in the direction of Saint-Amand (Loir-et-Cher), where the noise was heard. This was obviously the explosion of a bolide. If the phenomenon had occurred during the night, it would have been of a rare magnificence, and eyewitnesses would be numerous; but it happened at 5.30 pm in an enlightened atmosphere by a bright sunshine, so he could be clearly seen by a small number of observers, who, by chance, had at this time their sights on sky.

A 5.20 pm, a farmer from the canton of Ile-Bouchard who was in the countryside between Champigny and Brisay (see attached map), hit by a sudden increase of intensity of light, looked up and saw pass over him (I quote verbatim the words of his letter) a spear of fire that started moving with tremendous speed from the southwest to the northwest… This meteor seemed to split into two balls toward the tip of the spear; globes appeared to bow down and the other to straighten; It seemed then that the light arrow plunged into a cloud towards Sainte-Maure… I immediately looked at my watch: it was 5.20 pm; the color was orange, a little brighter at the time of separation of the two globes. I already started to forget my meteor, when I heard a snap, without any echo, in the direction of Tours. I thought it might be the sound of the explosion of the meteor; I looked at my watch: it was 5.26 pm; So six minutes had elapsed between the disappearance and the detonation that I had just heard.

The observer added that the appearance of the fire blade or a rocket is due to the persistence of the luminous impressions on the retina, and it is not a blade of fire, but a light body going very fast. I would add that the effect of the alleged bifurcation is also due to an illusion. These are two light bodies, very close and going very fast; when they pass above the observer, he only distinguishes a light dash, but, when they roll away from him, their angular displacement, becoming less and less fast, comes to be almost zero, and the eye can perceive the two distant objects. […]” 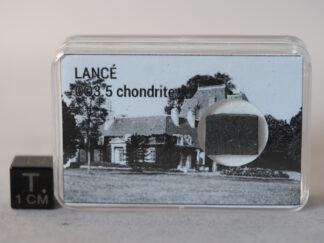 You're viewing: Lancé (CO3.5) – 0.675g 283.00$
Add to cart
We use cookies on our website to give you the most relevant experience by remembering your preferences and repeat visits. By clicking “Accept”, you consent to the use of ALL the cookies.
Cookie settingsACCEPT
Manage consent