One of the most famous historical fall ever ; the fall that was a landmark in the knowledge of the meteorites and their origin. Here is a 1.412g part slice.   It is very rare for sale.  Sold in a membrane box with label/certificate of authenticity + free old postcard of the Château du Fontenil where large stones of the l’Aigle meteorite fell in 1803.

On April 26, 1803, a meteor rain falls north of the small town of l’Aigle. This is Charles Lambotin, a student of mineralogy and trader of natural history objects in Paris, that wrote the first report about the fall. He published a letter written on May 3 by the citizen Marais, living in l’Aigle, to a friend living in the same building as Mr Lambotin. The friend of Mr. Marais, Mr. Château, had forwarded the letter to Mr Lambotin to alert the Academy of Sciences. Lambotin ordered to start the research north of l’Aigle. At the end of April, his « meteorite hunter » indicated that all the stones had been collected. Lambotin sold in his store many meteorites from l’Aigle to parisian collectors. Then he published the letter in the May-June issue of the Journal of Physics.

During the month of Messidor (July), the citizen Marais drew the first map of the l’Aigle strewnfield but it was too late to publish it. It was made public much later in the first edition of the Dictionary of Natural History (1816-1819) edited by Eugène Patrin. On July 17, 1803 (29 Messidor year 11), Jean-Baptiste Biot read his famous report in front of the members of the Institute of France. This 29 years old scientist was sent in Orne department by the Minister of Interior, Mr Chaptal, to investigate the exceptional fall of meteorites of l’Aigle, 140 kilometers west of Paris. At that time, meteorites theory, at least rocks from space, hardly met followers.

Biot had already defended in the Institute a theory that meteorites were rocks projected by the lunar craters when erupting. Before the wave of rumors triggered by this celestial event, Chaptal therefore took the decision to send Biot in l’Aigle. He went there on June 26, 1803 with a compass, a map of the region (1/86400) and a sample of the meteorite that fell in Barbotan in 1790. He began his study in Alençon then went to l’Aigle, systematically asking to travelers and peasants about the meteorite fall. At l’Aigle, he investigated throughout the region and got many testimonies. This enabled him to draw a map of the elliptical strewnfield. Biot gathered enough evidence of the spatial origin of meteorites. 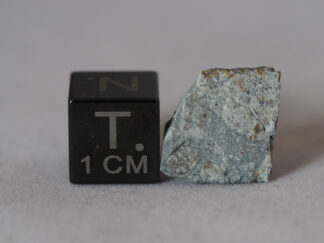 You're viewing: L’Aigle (L6) – 1.412g 1,560.00$
Add to cart
We use cookies on our website to give you the most relevant experience by remembering your preferences and repeat visits. By clicking “Accept”, you consent to the use of ALL the cookies.
Cookie settingsACCEPT
Manage consent