A rarity.  3.6 grams “skeleton”. Sold with label/certificate of authenticity

In 1767, the famous german naturalist Peter Simon Pallas is so famous that the Russian Empress Catherine II asks him to become a natural history teacher at the Academy of Sciences of Saint Petersburg. The Empress is interested in the natural ressources of her empire and Pallas is chosen to lead an expedition. In 1768, the scientists leaves Saint Petersburg to explore many provinces up to the limits of Siberia. The expedition lasted six years and Pallas travelled 28000 kilometers. In 1772, as he stays in the city of Krasnojarsk, he learns the existence of an iron mass discovered in 1749 (or 1750) by a cosack named Yakov Medvedef, near an iron mine, at about 200 kilometers south of Krasnojarsk. Medvedef decided to transport the object to his home, in the village of Oubeiskaja 30 kilometers from the place of find.

Pallas describes in one of his books the circumstances of discovery of this strange mass, mentioning that the Tatars considered this « ferrugineous stone » as a sacred object certainly thrown from the sky.

Nowadays, a memorial has been built to the theoritical place of find of this meteorite.

Krasnojarsk was initially described as the « Pallas Iron » before the term Pallasite was dedicated to this famous scientist. The Krasnojarsk meteorite is the type-specimen of the pallasites. 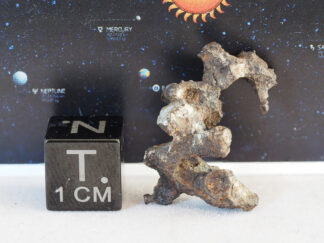 You're viewing: Krasnojarsk (pallasite) – 3.6g 870.00$
Add to cart
We use cookies on our website to give you the most relevant experience by remembering your preferences and repeat visits. By clicking “Accept”, you consent to the use of ALL the cookies.
Cookie settingsACCEPT
Manage consent