Rare french meteorite fall from 1874. Sold in collection box with label/certificate of authenticity.

On November 26, 1874 at 10:30 a.m., a thunderous roll was heard in Maël-Pestivien and ten kilometers around. A farmer “who was near the hamlet of Kerilis saw the land spring up again about 12 m from him. Frightened by the phenomenon, he hurriedly left the places and does not return until the next day.
He discovers in the field a rather deep hole containing a stone of about 5 kilograms. He picks it up and takes it home. After distributing some some pieces to friends, he meets Mr. Roudic, the parish priest,
who recognizes a meteorite there and then buys it. The meteorite already weighs only 4.2 kilograms.
M. Roudic then cedes it to the Bishop of Saint-Brieuc, Mgr David, who proposes in 1880 the stone at the National Museum of Natural History in Paris.
The local press of Côtes-d´Armor and Finistère do not seem to have reported the phenomenon in its columns. It was not until 1877 that the Company emulation of the Côtes-du-Nord evokes the existence of this meteorite, without specify the circumstances of the fall. Details of the celestial event are indicated in a note by G. A. Daubrée published in 1880 in the Proceedings sessions of the Academy of Sciences.
The hamlet of Kerilis does not appear on recent maps or cadastres old ones (at least on those from 1832 that I have consulted). On the other hand, there is nowadays a hamlet called Kerismaël, and nearby a chapel bearing the name of Saint-Pierre-de-Kerilismaël. This locality is five kilometers northeast of Maël-Pestivien and was already located in 1874 on the territory of this commune.
I think the meteorite fell in this hamlet or near this chapel and I therefore consider valid these coordinates geographic. The Bulletin, on the other hand, gives fairly waves, very close to Maël-Pestivien. (48 ° 24’N, 3 ° 18’W). 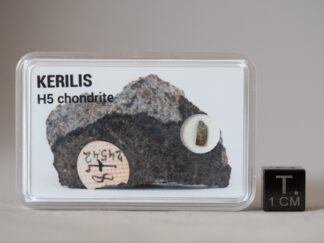 You're viewing: Kerilis (H5) – 0.043g 70.00$
Add to cart
We use cookies on our website to give you the most relevant experience by remembering your preferences and repeat visits. By clicking “Accept”, you consent to the use of ALL the cookies.
Cookie settingsACCEPT
Manage consent