A meteorite fell in August 1837 at Esnandes. The exact date is not known and no article in the local press at that time can be found. The finder was a peasant, who saw the meteorite fall, and said he burned his hands while trying to pick up the stone. He also claimed to have “experienced a strong electric shock.” The stone weighed 1.5 kg and broke on impact. Fragments were sent to the Natural History Cabinet of Bordeaux and then to the Institut de France in Paris. 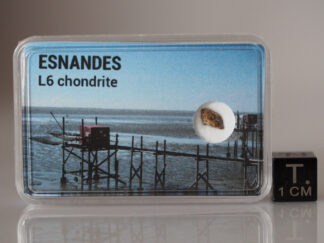 You're viewing: Esnandes (L6) – 0.084g 90.00 €
Add to cart
We use cookies on our website to give you the most relevant experience by remembering your preferences and repeat visits. By clicking “Accept”, you consent to the use of ALL the cookies.
Cookie settingsACCEPT
Manage consent