History: (H. Haack, NHMD): A bright fireball was observed over eastern Denmark Feb. 6, 2016, 22:07:19 (UTC+1). It was overcast in the area below the fireball, but many people reported having seen a very bright light. Pictures of the fireball were taken from three locations in Germany and one in Austria (at a distance of 890 km) by automatic cameras designed to take pictures of noctilucent clouds. A surveillance camera on the Danish west coast also recorded a video of the fireball. None of the cameras in the Danish fireball network had clear skies during the event. 279 reports with observations of the fireball and/or sound phenomena were received by the Danish fireball network. Loud sonic booms were heard by many people up to 30 km from the place where the meteorites were found. The day after the fireball was observed the first meteorite (60 g fragment) was found on the tiles in front of the main door of a private house in Ejby, which is a suburb in the western part of Copenhagen. The owner of the house had not seen the rock before. Later that day 6.5 kg of shattered fragments were found on the tiled courtyard of a business property. These fragments had not been there when the business closed on Friday – the day before the fall. During the following 19 days a total of 11 individual meteorites were found in an area measuring 5 × 5 km. The biggest piece weighed 6.5 kg. It hit a tiled area and shattered into hundreds of fragments.

Physical characteristics: 11 meteorites have been recovered, with a total mass of 8938 g. Some of the fragments were recovered wet and the weights are therefore decreasing as the samples dry out.

Petrography: (M. Patzek and A. Bischoff, IfP). Based on the study of the thin sections, Ejby is unbrecciated. Highly recrystallized areas with large plagioclase grains were observed, and areas with abundant relict chondrules also exist. Thus, the rock is transitional between type 5 and 6. In places, high metal and sulfide abundances were found. Olivine shows undulatory extinction indicating that the rock is very weakly shocked (S2). As opaque phases metals (kamacite, taenite), troilite, and chromite were observed. Other accessory phases include Cl-apatite and merrillite.

Specimens: Except for a few small fragments of the 6.5 kg main mass, all recovered fragments are at NHMD. 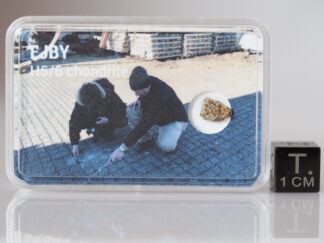 You're viewing: Ejby (H5/6) – 0.170g 50.00 €
Add to cart
We use cookies on our website to give you the most relevant experience by remembering your preferences and repeat visits. By clicking “Accept”, you consent to the use of ALL the cookies.
Cookie settingsACCEPT
Manage consent