The meteorite is sold in a nice collection box with a separate label / signed certificate of authenticity. 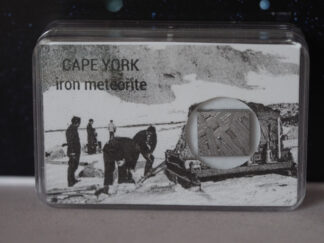 You're viewing: Cape York (iron, IIIAB) – 2.1g $40
Add to cart
We use cookies to ensure that we give you the best experience on our website. If you continue to use this site we will assume that you are happy with it. Nous utilisons des cookies pour vous garantir la meilleure expérience sur notre site. Si vous continuez à utiliser ce dernier, nous considérerons que vous acceptez l'utilisation des cookies.Ok