The Inuit of northwest Greenland were the first people to locate the Cape York meteorites, which they referred to as saviksue (“great irons”). Before the arrival of European traders, these iron meteorites were the main source of metal for knives, harpoons and other tools.

In 1818, the British First Ross Expedition (led by Captain John Ross) made contact with Inuit on the northern shore of Melville Bay, who stated they had settled in the area to exploit a nearby source of iron. The Inuit described the location of this iron, but poor weather and sea ice prevented Ross from investigating further. Ross correctly surmised that the large iron rocks described by the Inuit were meteorites, and purchased several tools with blades made of the meteoritic iron.

Between 1818 and 1883, five further expeditions to the area were mounted by Britain, Sweden and Denmark, which all failed to find the source of the iron. Only in 1894 did a Western explorer reach the meteorite: Robert E. Peary, of the US Navy. Peary enlisted the help of a local Inuit guide, who brought him to Saviksoah Island, just off northern Greenland’s Cape York. Despite having no right to it, Peary dedicated three years to planning and committing the theft of the meteorite. This process required the building of a small, short railroad. Peary sold the pieces for $40,000 (equivalent to $1.3 million in 2021[8]) to the American Museum of Natural History in New York City where they are still on display. 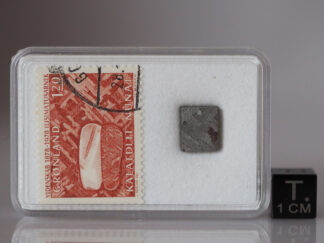 You're viewing: Cape York (iron IIIAB) – 1.90g + stamp 38.00 €
Add to cart
We use cookies on our website to give you the most relevant experience by remembering your preferences and repeat visits. By clicking “Accept”, you consent to the use of ALL the cookies.
Cookie settingsACCEPT
Manage consent