Fragment of the pallasite “Brenham”. Sold in a box with label/certificate of authenticity.

Brenham, Kansas is the location of a meteorite crater that was explored by H. H. Ninninger in the early decades of the last century. All around the surrounding land have been found masses both large and small of this Pallasite. But, long before the farming of the mid-west and the finding of the first meteorites by settlers, the iron was being widely traded and used by the Native American population. Pieces of meteoritic iron originally from the Brenham area have been found in archeological sites over much of the eastern US. Some of the masses have large areas devoid of the peridot crystals while other portions are rich in the yellow-green colored gems and has a beautiful Widmanstatten pattern when etched. 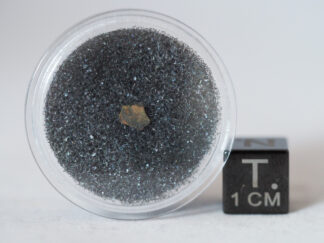 You're viewing: Brenham (pallasite) fragment 5.70 €
Add to cart
We use cookies on our website to give you the most relevant experience by remembering your preferences and repeat visits. By clicking “Accept”, you consent to the use of ALL the cookies.
Cookie settingsACCEPT
Manage consent