Sold in a membrane box with label/certificate of authenticity

The first mass (54.2 kg) of Bencubbin was discovered in 1930 during ploughing in newly cleared land, on Holland and Breakill’s wheat farm (Block 2557), 15 kilometres north-west of Bencubbin.

Bencubbin has subsequently proved to be an extreme rarity and have significant scientific importance. Originally classified as a ‘stony-iron’, today it is recognised as the type specimen of a new group of carbonaceous chondrites (CB), or ‘Bencubbinites’.

Bencubbin is a breccia (a rock formed of angular fragments cemented by a finer material) enclosing clasts of material from other chondritic groups, and the meteorite remains the subject of extensive ongoing research. 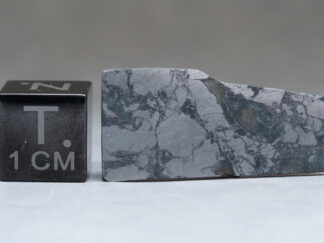 You're viewing: Bencubbin (CBa) – 1.68g 390.00$
Add to cart
We use cookies on our website to give you the most relevant experience by remembering your preferences and repeat visits. By clicking “Accept”, you consent to the use of ALL the cookies.
Cookie settingsACCEPT
Manage consent