Bassikounou is the perfect exemple of a recent meteorite fall which remained unknown to the public for several months before its discovery. In fact, the strewnfield is located in an extremely remote area where poor populations which don’t have access to modern communication technologies live. I highly recommend the report published by the german meteorite hunter Svend Bühl. You can read it at http://www.meteorite-recon.com

Mauritanian newspaper Horizons (october 23 to 26, 2006) published a short report of the fall : « The inhabitants of the wilaya of Hodh Echargh observed on october 16, 2006 in the evening the fall of a bright bolide which lit the most part of the wilaya, particularly from Nema to Bassiknou. Administrative and military authorities of the wilaya went at the place of fall and reported that a large meteorite had fallen at 17 km from Bassiknou and dug a large ditch and they took some fragments for its study. »

History: A fireball was witnessed in the area, but no records of the direction of movement were recorded. A single stone of 3165 g was found by A. Salem El Moichine, a local resident, on the same day at 13:00 hr local time, 11 km SE of Bassikounou. The sample for classification was provided to NMBE by M. Ould Mounir, Nouakchott, who obtained it from his cousin who recovered the meteorite. According to S. Buhl (Hamburg, Germany), more than 20 specimens were later recovered by locals and meteorite finders. These finds define a 8 km long strewnfield. The total recovered mass is 46.00 kg.

Physical characteristics: The 3165 g specimen is largely covered by black fusion crust. The interior is light gray. On the surface of the fusion crust there is some adherent soil material, some of which is bright red. Shortly after recovery, the stone was cut into two pieces of 1200 and 1950 g. The larger piece has a rectangular shape and shows indications of flow-lines in the fusion crust.

Type specimens: A total of 115 g are on deposit at NMBE. Boudreaux holds the main mass. 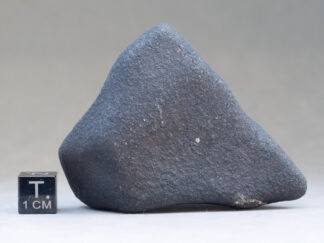 You're viewing: Bassikounou (H5) – 138g 995.00 €
Add to cart
We use cookies on our website to give you the most relevant experience by remembering your preferences and repeat visits. By clicking “Accept”, you consent to the use of ALL the cookies.
Cookie settingsACCEPT
Manage consent