Fragment. Sold in collection box with label/certificate of authenticity.

On December 9, 1858 in the early morning, the inhabitants of the department of Haute-Garonne observe a luminous car in the sky then hear distinctly a loud bang followed by a continuous rumble.
The meteor is moving from northeast to southwest according to witnesses. In 1859, Mr. Filhol indicates that the trajectory follows rather the direction of the south-west towards the north-east since the car would have been seen successively in Rieumes, Noé, Aurignac, before falling near Montréjeau. He visibly reversed the trajectory since these municipalities are globally aligned on a map along an axis northeast to southwest. It is this last trajectory that we will adopt. In on the other hand, the luminous phenomenon was not observed in Toulouse, or so no witnesses mentioned it.
Two meteorites are found; a grave in a field at the bottom of the coast that leads to Montréjeau, near the village of Ausson, and weighs between 40 and 45 kg; the other landed on a barn belonging to Madame Jeanne-Marie Capéran next to the church of Clarac; this last stone weighs 8 to 10 kg.
The two towns are five kilometers apart.
It is also reported that a hole similar to Ausson’s was seen in the commune of Cassagnabère-Tournas, located more than 20 kilometers from Ausson. But no stone seems to have been found …
The two meteorites picked up in Ausson and Clarac suffer a sad fate since they are broken by the inhabitants and the latter share the parts. Fortunately, the members of a committee set up by the Toulouse Academy of Sciences and composed of MM. Petit, Leymerie and Filhol manage to get hold of some nice pieces of the fall. Although the fall is still nearly 160 years old, it would be possible to door-to-door in the localities around Montréjeau to try to find the trace of some pieces of this meteorite.
A year after the fall, M. Filhol publishes the first analysis in the Mémoires of the Imperial Academy of Sciences, Inscriptions and Letters of Toulouse. Then, in 1859, G. Chancel and A. Moitessier updated the analysis of the meteorite of Ausson by applying the protocols popularized by Berzelius. 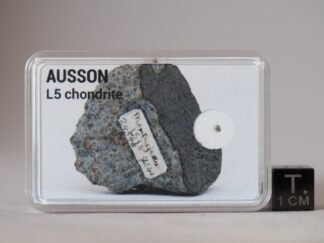 You're viewing: Ausson (L5) – micro 33.25 €
Add to cart
We use cookies on our website to give you the most relevant experience by remembering your preferences and repeat visits. By clicking “Accept”, you consent to the use of ALL the cookies.
Cookie settingsACCEPT
Manage consent