Here is the main mass of the MS-MU-27 Almahata Sitta stone. It is classified as ureilite, polymict, anomalous.

It is sold with label/certificate of authenticity.

If you live in € zone, please use € currency (this way, you’ll avoid paying Paypal fees for currency conversion).

History: On October 6, 2008, a small asteroid called 2008 TC3 was discovered by the automated Catalina Sky Survey 1.5 m telescope at Mount Lemmon, Tucson, Arizona, and found to be on a collision course with Earth. Numerous astronomical observatories followed the object until it entered the Earth’s umbra at Oct. 7.076 UTC the next day. The astrometric position of 295 observations of 2008 TC3 over the period Oct. 6.278 to Oct. 7.063 was used to calculate the approach trajectory over the impact location in northern Sudan. The object exploded at a high ~37 km altitude over the Nubian Desert, and as a result the meteorites are spread over a large area. A search was organized by the University of Khartoum on Dec. 2–9, led by P. Jenniskens (SETI Institute) and M. H. Shaddad (Khartoum).

Physical characteristics: During the first expedition, 15 meteorites were found along the approach path of the asteroid, for a total weight of 563 g. A second field expedition, on Dec. 25–30, added 37 meteorites, for a total recovered weight of 3.95 kg, spread over an area of 28 × 5 km. The meteorites are dark, thinly crusted, and roundish in shape, ranging in size from 1–10 cm.

Petrography (M. Zolensky, JSC, and A. Steele, CIW): The sample is a fine-grained, fragmental breccia with subrounded mineral fragments and olivine aggregates embedded in a cataclastic matrix of ureilitic material. Mineral fragments include polycrystalline olivine, low-Ca pyroxene, pigeonite and carbon-rich aggregates up to 0.5 mm in maximum dimension, kamacite, and troilite. The examined samples have considerable porosity; the pore walls are commonly coated by anhedral to euhedral crystals of low-Ca pyroxene (Fs2Wo3) and olivine (Fa12–14), and in some instances spherules of kamacite and botryoidal masses of troilite. Most olivine and pyroxene aggregates have interstitial silicates with Si-content that increases adjacent to metal grains. Some clasts consist of rounded pyroxene grains containing an abundant nanophase Fe-rich mineral. Aggregates of carbonaceous material are common and measure up to 0.5 mm—these contain fine-grained troilite and kamacite, the latter containing Si and P. The major carbon phase is graphite. Shock effects are not apparent.

Type specimens: Samples with masses ranging from a few to a few hundred grams for a total of 3.95 kg are on deposit at Khartoum.

Twelve hours before the impact, on october 6, 2008, an asteroid was detected by Richard Kowalski (Catalina Sky Survey of the Mt. Lemmon Observatory). Many observatories followed the object until it entered the atmosphere and its impact location was determined quickly and with a remarquable accuracy. On October 7, the asteroid 2008 TC3 hit the Earth and fragmented at an altitude of 37 kilometers above the desert of Nubia in the north of Sudan. The area surrounding the asteroid’s approach path was searched, resulting in the first recovery of meteorites from an asteroid observed in space. This was also the first recovery of remains from a fragile ‘‘cometary’’ PE = IIIa ⁄ b type fireball.

The place is located near Station 6, a railroad station in the desert where some families live permanently. A team of 47 students and staff of the Khartoum University was created. After 2 hours of search, the first specimen of Almahata Sitta was found by Mohammed Alameen. The meteorite was named Almahata Sitta which means Station 6 in arabic. During the searches, over 600 meteorites were recovered, with weights from 0.2 to 379 grams specimens from a 30 x 7 kilometers strewnfield.The strewn field was shifted nearly 1.8 km south from the calculated approach path. The influence of winds on the distribution of the meteorites, and on the motion of the dust train, was investigated. The estimated total mass of fragments having hit the ground is 39 ± 6 kg.

In 2009, a new expedition organized by the Khartoum University found new specimens. These pieces were classified 4 years later in Germany in the Westfälische Wilhelms-Universität Münster, Institute Planetology by Prof. Addy Bischoff. Until today, he worked on the specimen referenced as MS-MU-001 to MS-MU-028.

Almahata Sitta is an incredible meteorite, expensive to acquire and of an amazing variety of classifications. 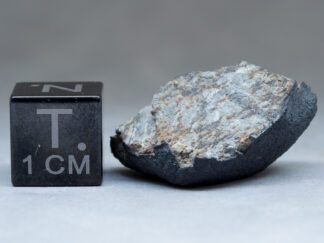 You're viewing: Almahata Sitta (ureilite) – 5.34g 2,690.00$
Add to cart
We use cookies on our website to give you the most relevant experience by remembering your preferences and repeat visits. By clicking “Accept”, you consent to the use of ALL the cookies.
Cookie settingsACCEPT
Manage consent