« At 21:07 local time on 23 April 2019, a meteorite fall was reported in Aguas Zarcas, San Carlos county, Alajuela province, Costa Rica. The fireball traveled WNW to ESE and was caught on cameras of the National Seismological Network (RSN) at the summit of Poás and Turrialba volcanoes, and from the Volcanological and Seismological Observatory of Costa Rica (OVSICORI). Sightings were reported from Quepos (Central Pacific) in the south and north to La Palmera in San Carlos. » Source : Meteoritical Bulletin.

The inner parts of the analyzed specimens show chondrules on varying areal percentages, within a dark-gray to black matrix. Calcium-Aluminum rich inclusions (CAI), sub-millimetric crystals of plagioclase, olivine, and sulphide and metallic flakes are also present in the matrix. A clear fusion crust is evident in some fragments showing cooling microfractures. It is slightly magnetic and expels a particular organic-like odor. Geochemical and isotopic analyses performed at the Universities of Costa Rica, Arizona and Nuevo Mexico, among others, and the observed textural characteristics of the meteorite, indicate that it belongs to the Carbonaceous Chondrite classification of rocky meteorites, type CM2 which entails the presence of hydrated minerals within a fine matrix composed of carbon, and nickel-rich sulphides components. CM2 meteorites also show general compositions and oxygen isotope compositions similar to the primitive solar nebula. Carbonaceous chondrites represent only ~4% of the total recovered meteorites worldwide and they preserve the geochemical, isotopic, and mineralogical composition of the first millions of years of the history and evolution of the Solar System, making the Aguas Zarcas Meteorite an extraordinary event, and sparking national and international scientific interest. 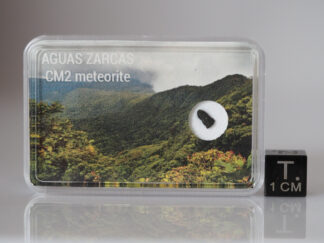 You're viewing: Aguas Zarcas (CM2) – 0.024g 15.50 €
Add to cart
We use cookies on our website to give you the most relevant experience by remembering your preferences and repeat visits. By clicking “Accept”, you consent to the use of ALL the cookies.
Cookie settingsACCEPT
Manage consent