Part slice – 6.44g.  Sold in a membrane box with a label/certificate of authenticity.

Petrography: Visually the cut surfaces are dominated by a gray matrix, studded with well-developed chondrules and chondrule fragments. Some chondrules to 4 mm but the majority are 0.1 to 1 mm across. Observations on an 8 × 7 cm slab shows the following clasts: L6 (3 × 1 cm); L5 (1.5 × 1 cm); and sub-rounded 1-cm dark clast with sparse 200 micron chondrules. Shock veins are rare. Metal and sulfide occurs as: fined grained spheres in the matrix; armoring chondrules; and, occasional lumps to 5 mm. Petrographic observations show a range of chondrule types dominated by PO, POP, RP, PP, and BO. Particularly evident in thin section are BO and PO chondrules with reddish purple (in plain polarized light) glass that is isotropic under crossed polars. The silicates are extensively shocked with olivine showing mosaicism and PDFs. SEM observations show that much of the metal/sulfide in the matrix occurs as fine-droplets, veins, and melt pods. Large Fe-Ni grains are polycrystalline with each crystal showing a kamacite core, dark-etched martensitic inner rim, and outer Ni-rich rim. Troilite is dominantly single crystal, and occasionally polycrystalline. Sparse chromite grains.

Specimens: Michael Farmer and Moritz Karl – 50 kg, Eric Twelker 7.74 kg, and ASU 242 g. Based on photographic evidence, it is estimated that the Nigerian government collected on the order of 100 kg of stones, though this mass is uncertain. Given the size of the fall and area of the fall, the total mass is conservatively given as 160 kg. 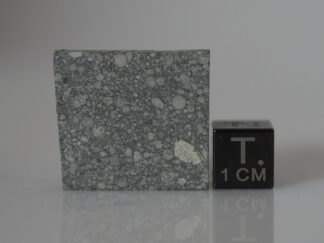 You're viewing: Aba Panu (L3) – 6.44g 71.25 €
Add to cart
We use cookies on our website to give you the most relevant experience by remembering your preferences and repeat visits. By clicking “Accept”, you consent to the use of ALL the cookies.
Cookie settingsACCEPT
Manage consent