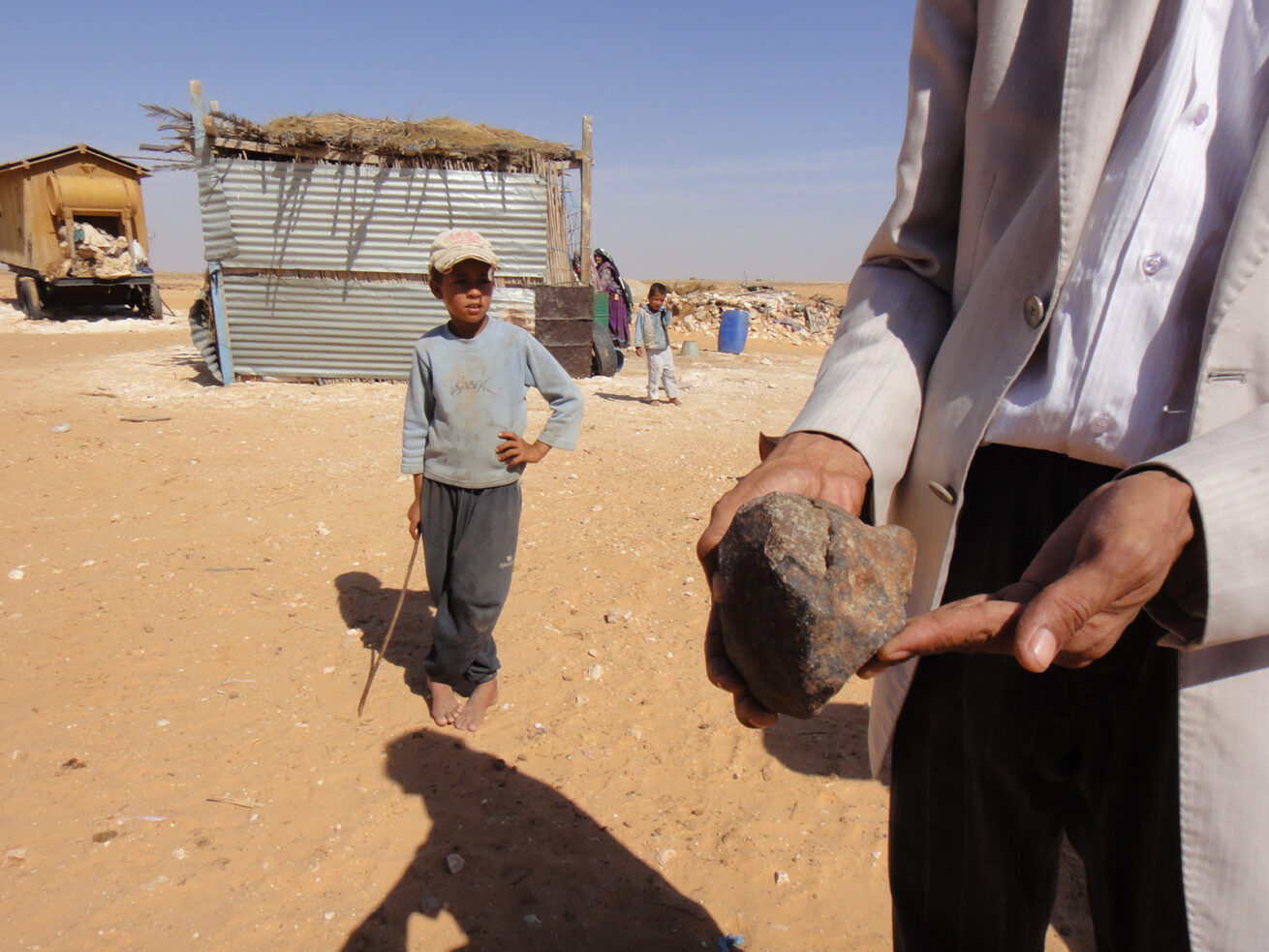 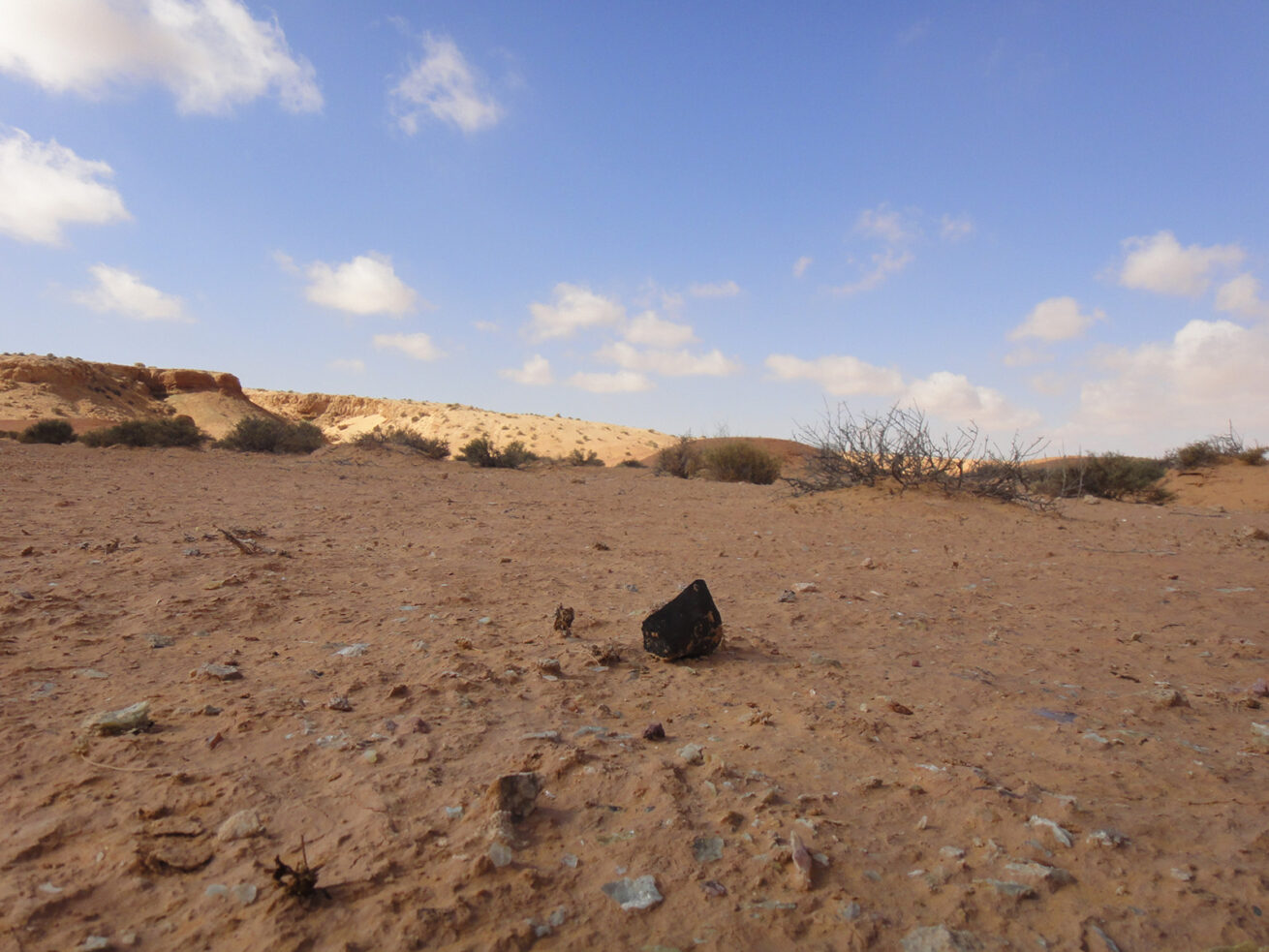 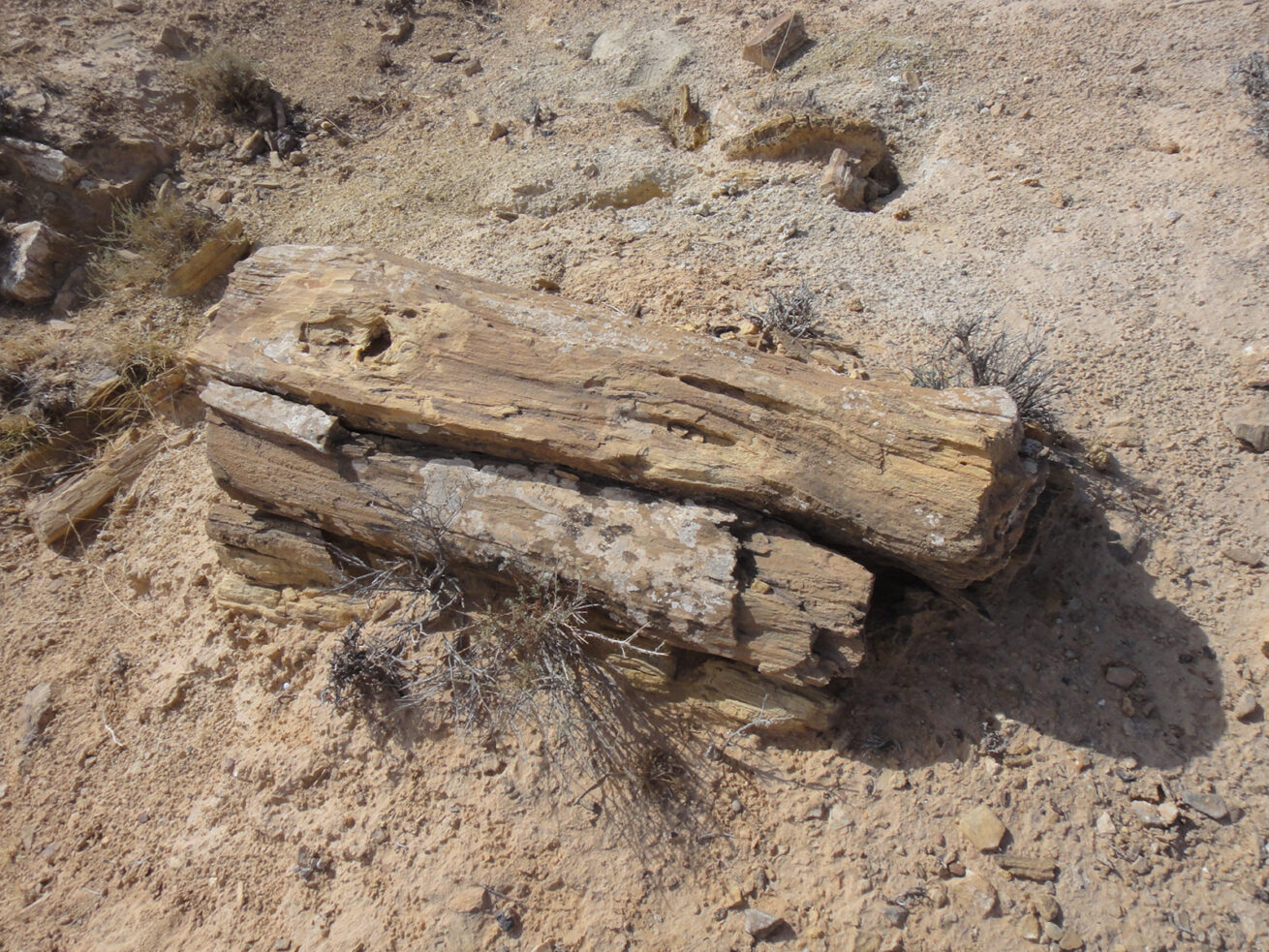 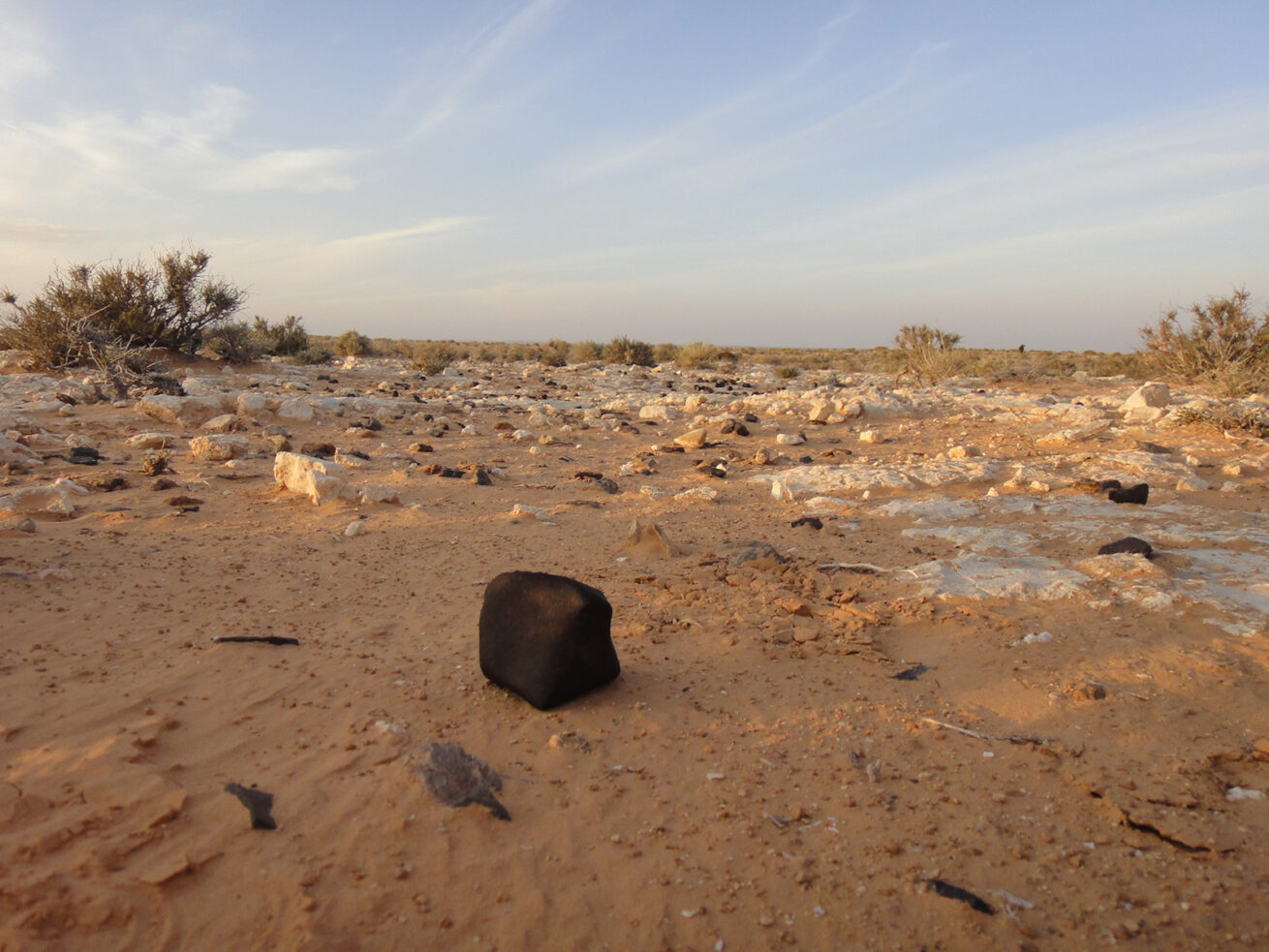 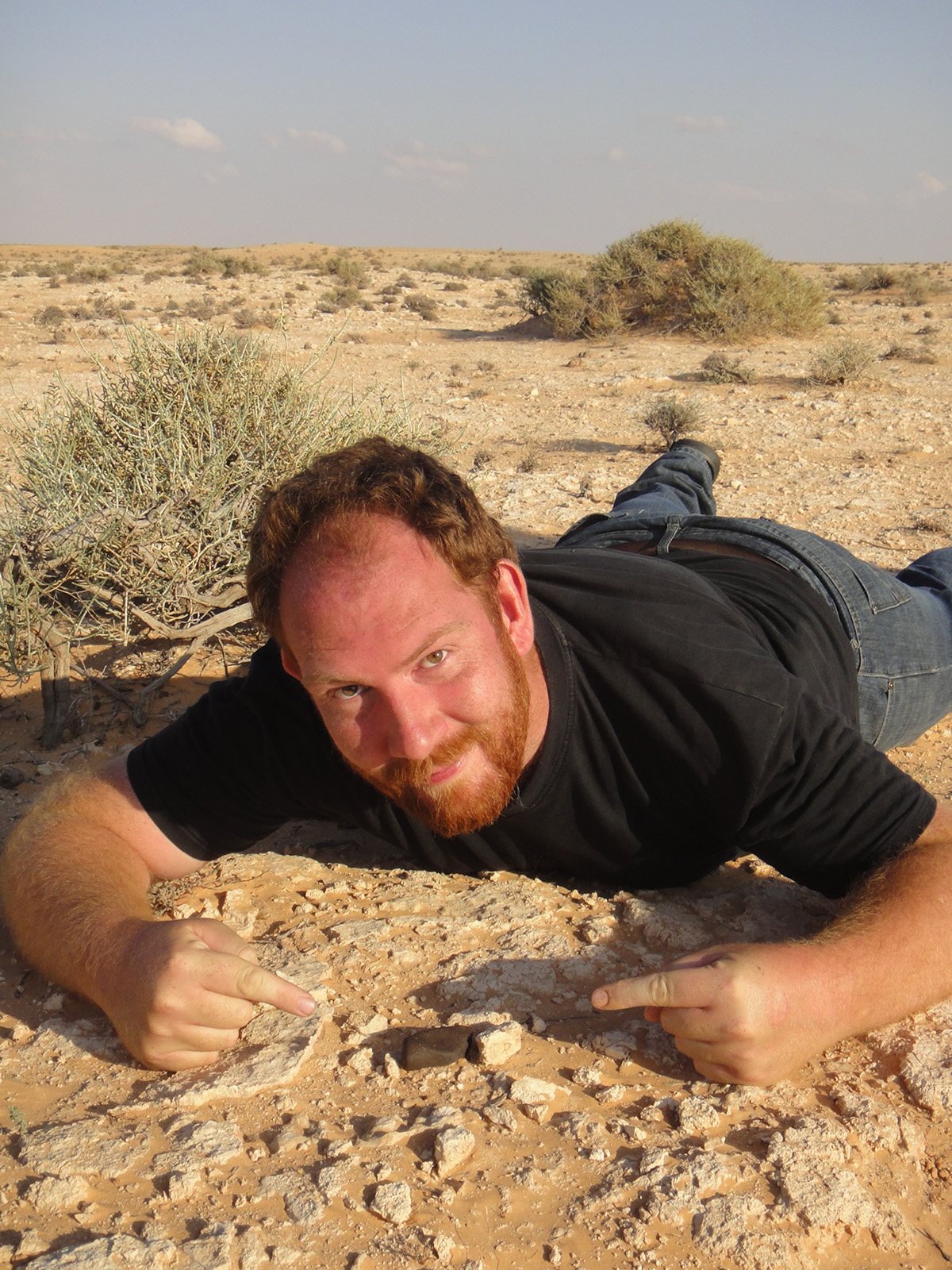 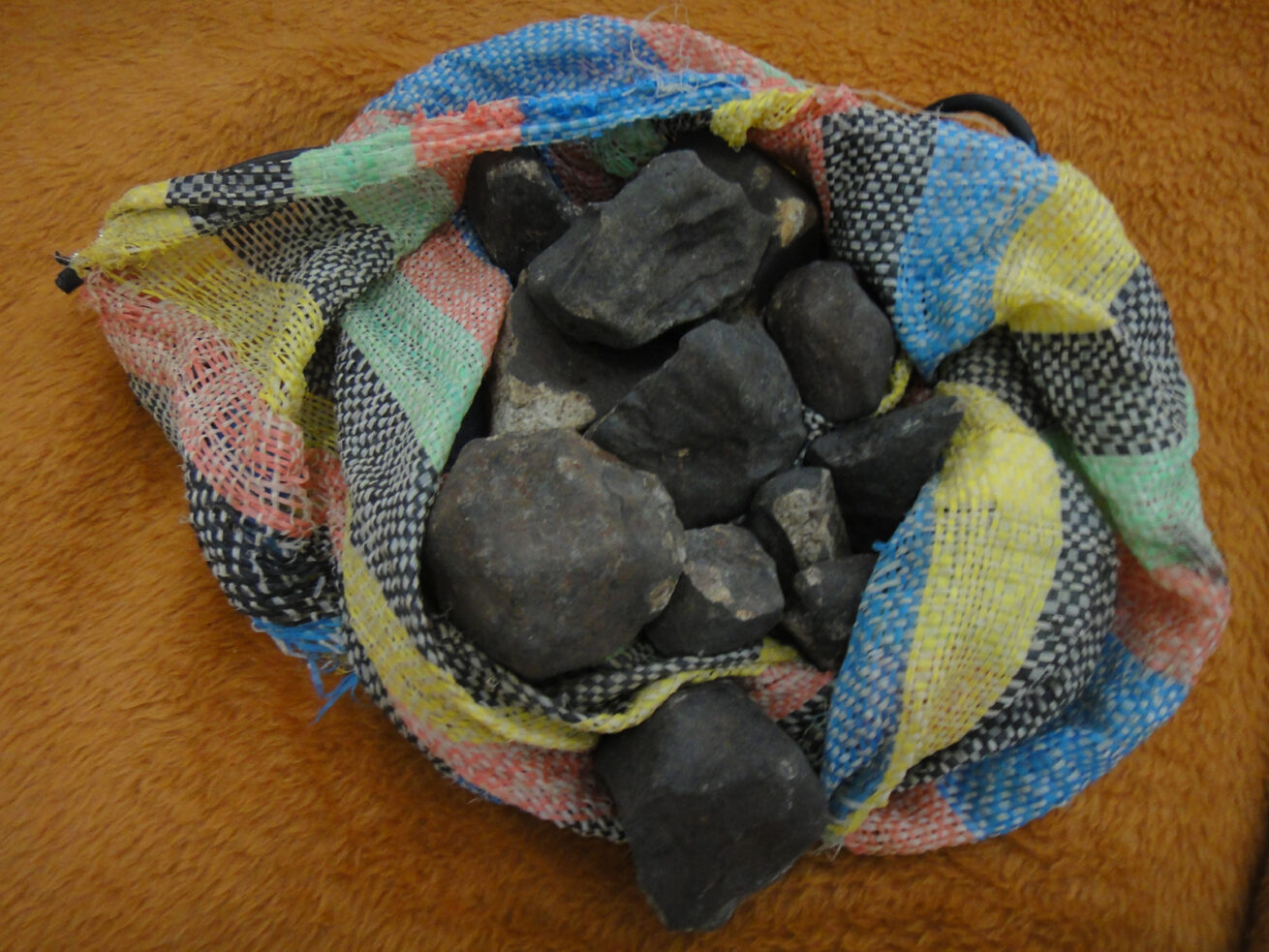 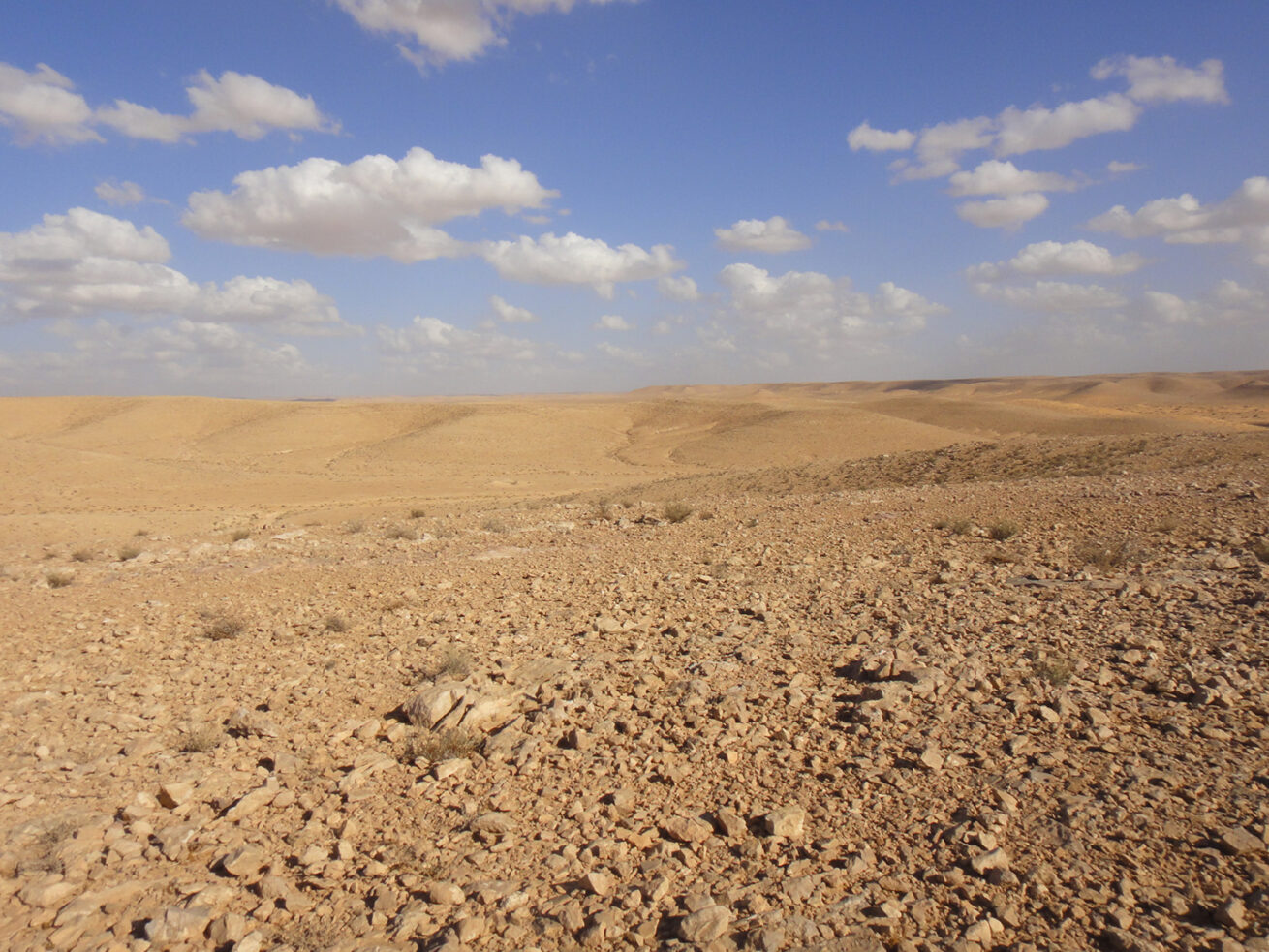 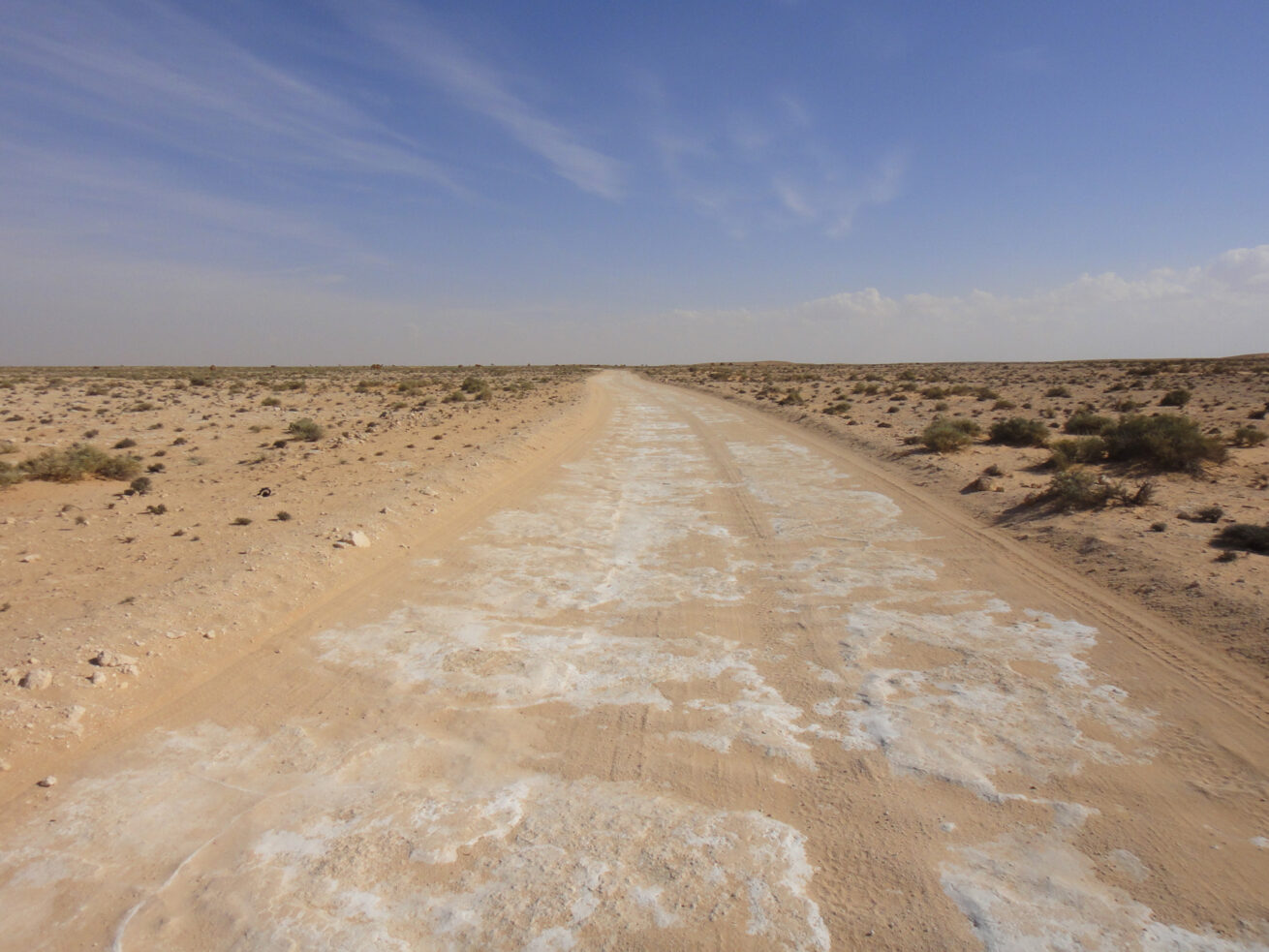 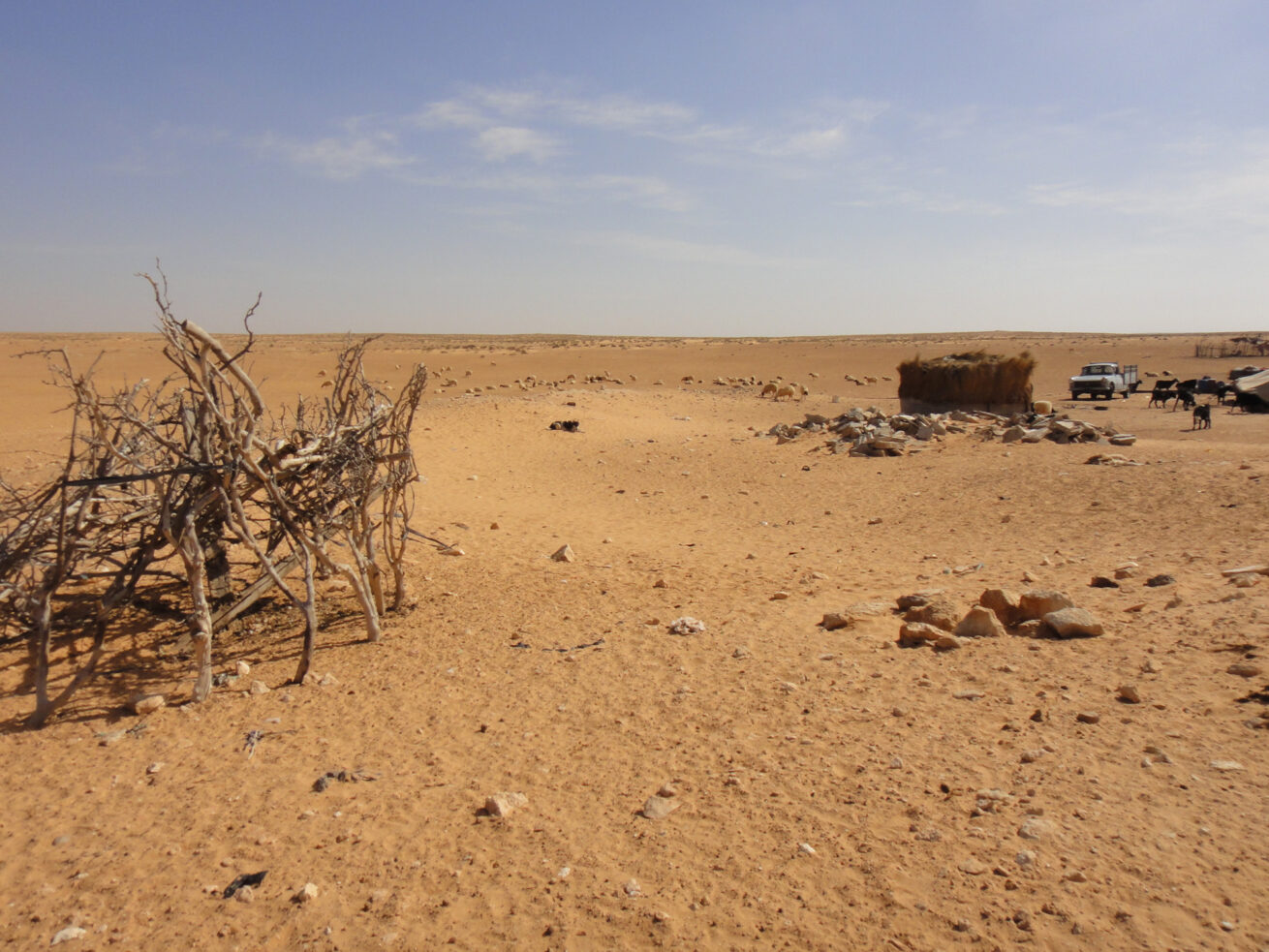 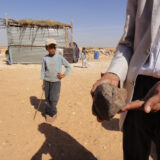 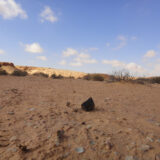 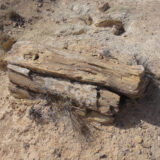 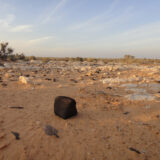 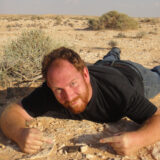 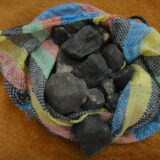 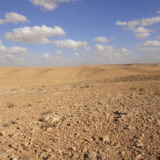 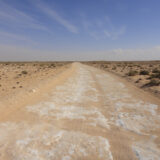 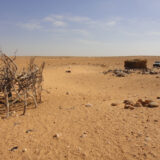 On April 15, 2012, we left Tunisia having found some nice small chondrites but with the regret of not having bought the bag of Beni M’hira stones offered to us.

In October of the same year, our small group expanded with a new partner, Guillaume, Fabien’s brother. We are going to Tunisia for an 11-day trip.

Our main goal is to explore again the desert between Medenine, Tataouine and Ksar Ghilane, looking for suitable areas and new meteorites.

After five days of intensive search, the pickings are slim. We feel a bit down in the dumps. We found only five meteorites. One proves to be an interesting primitive chondrite (Metameur 005, an LL<3.4), but this is far from equaling in number and quality the findings from deserts of other countries that we explore regularly.

We are, of course, happy with these small discoveries but we expected better.

Back in Tataouine, we contact the seller of the bag of Beni M’hira meteorites to try a new negotiation. He seems more open than last time and we get an interview fairly quickly. The meeting takes place in Tataouine – we will again examine the famous stones before we decide. We find our way through a dark alley in the city – the atmosphere is as good as in the best thrillers. The seller is on the phone and can not speak to us directly – he still does not speak French. We are on the lookout and alert because the amount of cash that we carry for a possible purchase is quite tidy. The seller has not moved an iota in his position. Worse, he slightly increased the price. Nevertheless, we decide to acquire all the meteorites at this price but only because the acquisition will allow us to find the strewn field. We hope that there are still other stones to be collected there. By showing one of these stones to the locals in Beni M’hira it may be possible to find the exact spot where they were found eleven years earlier. The chances are slim but we must try. The Meteoritical Bulletin coordinates indicate that the fall was on the edge of town, but we know that this is certainly not true. To reference a meteorite, a GPS coordinate truncated near the eponymous place is sometimes enough, but it is not enough for meteorite hunters.

Tomorrow will be an important day. It’s crucial to gain strength for the field survey that promises to be complicated, so we spend the remainder of the day resting, enjoying the local couscous in our canteen.

Our team arrives at around 8 am in Beni M’hira. We sit on a bar terrace and show one of the meteorites to a group of young people. Unfortunately, none of them know these black stones or even the story of the fall that occurred eleven years earlier in the region. We move to a better place a little further on where a group of older people are talking. One of them has seen one of these stones in the desert and we ask him where they were found. He tells us that the place is 15 kilometers to the south and is called “El Masbih”. This is precisely the name of the place that was reported in the testimony of Dr Belhedi. We are getting closer and closer!

We pass through the city, heading south, and drive about fifteen kilometers. On all sides it is desert. It is imperative that we find a resident who will agree to guide us to the right place. We turn around and go back to the city, and we stop at the first store we come to. This is the mid-day – people chat, buy some food, walk. Some of them recognize the stones. None of them speak French, but they call a man who does. He tells us about an old shepherd in the desert who owns one of these stones. After a few minutes of discussion, we propose to him that he guide us to this man, and he accepts. We drive for twenty minutes and then we leave the road, entering the desert to meet the one who might own one of the meteorites. The old man is there. He shows us a stone of about 2 kilograms (by eye). The meteorite clearly belongs to a fall as recent as the one we are looking for, but it has suffered some damage because it was kept under poor conditions. It’s rusty and most of the crust is gone. The man then guides us to where he found this stone, a few hundred meters from the camp. We go with him to the place and record the GPS coordinates. After taking a few photos of this specimen, our group returns to the city where our one-day guide spontaneously invites us to eat couscous. During the meal, we learn that he is a firearms and alcohol dealer between Algeria, Tunisia and Libya, but he has a sense of hospitality.

After being restored, we leave our host, thanking him for his hospitality. We go back to the desert and start our research.

Fabien has drawn some potential areas on a map, based on an east-west trajectory. This axis seems realistic given the first sound evidence from inhabitants of Tataouine. The meteorite could have fragmented over the city and ended further east.

A few miles before the shepherd’s hut we find a very fast track to the left of the paved road. We drive about six miles before starting exploration on foot. After three hours of fruitless hunting on the edge of the track, we decide to return to Tataouine. Disappointed, we conclude that our estimates are wrong and that we must look elsewhere.

It’s not easy to find meteorites in this desert area of several hundred square kilometers, with only a single GPS reference and no certainty as to the trajectory of the bolide. We need to relax before reaching the paved road. Mary sees camels and suggests stopping to feed them and take some photographs. We give them sweets. The animals, suspicious at first, become easily manageable once they have linked us to an easy source of food, and even end up being persistent! After this recreational interlude, as we are going back to the car, Marie suddenly finds a beautiful and fresh meteorite (177g). We have no doubt that we are in the ellipse of the fall of 2001. A few minutes later, Guillaume discovers another two almost complete specimens – one 58 grams and the other 138 grams. It is now dusk and we leave the area overjoyed. We have found the strewn field of Beni M’hira!

We now have four GPS points that are 3.09 km apart, and, therefore, the beginning of the fall path. It is not east-west as we initially thought but most probably north-south.

Back at the hotel we weigh our three findings. The scale indicates a total weight of exactly 373 grams. Not bad for only 80 minutes of casual searching.

At the restaurant, we imagine what awaits us. We will need many weeks to recover most of the stones. The fall must have been extremely violent. Surely, there are tens or hundreds of stones to be discovered. This trip is not enough. We will have to come back many times.

The first day allowed us to understand the strewn field. The hunting area is a plateau that overhangs a depression named Sebkhet Oum El Ghilliate (actually a dry lake) north of the ellipse. The ground of the plateau is composed of soil and clear little stones, covered from place to place with small shrubs typical of the Tunisian desert, and dotted with mounds of sand. Some surfaces are also cultivated or plowed. We go to bed with our heads full of dreams of celestial stones.

The next day we continue our hunting using a systematic procedure. Each discovery is photographed, noted in a book, and the GPS coordinates are recorded. We also record our GPS track (the path we have followed in the field). Changing light often forces us to turn our backs to the sun to avoid glare. The best hours for searching are those where the sun is at its zenith (no shadows) or late afternoon when the light is subdued. Slightly cloudy weather is ideal because it helps to reduce eyestrain caused by the confusion of shadows cast by the various landforms.

In the desert, we meet two young shepherds who are surprised by our presence in the middle of nowhere. Few outsiders venture into this area. They normally inhabit only pools and hotels of Djerba, and possibly the souk of Tataouine during excursions! We show them a meteorite and we offer them a magnetic cane. The afternoon is devoted to the exploration of an area south of the track. It does produce one chondrite, found by Marie. There may have been several successive explosions during the fall, explaining why some large areas are free of meteorite stones.

By late afternoon, one of the shepherds comes back with a beautiful complete stone of about 40 grams. He tells us the precise location which we record in the book (32 ° 47’ 28.40’’ N, 10 ° 52’ 10.90’’ E) after we get there. Pierre-Marie is also lucky to find a completely different, very weathered chondrite from a previous fall. We call it Beni M’hira (b) pending classification. It weighs 55.75 grams (we will find other stones from this fall on future trips for a TKW of 93.30 grams). It is very fragmented (nine pieces). Who says lightning never strikes twice in the same place?

Having been lucky enough to find two unrelated chondrites in the strewn field of the Tatahouine diogenite, we realize the fabulous meteorite accumulation in the deserts, even if finding these little black stones remains the work of busy bee.

To end the day on a high note, Fabien discovers three specimens of Beni M’hira of successively larger sizes, a few meters away. Simply incredible! The score of the day is impressive.

We found ten meteorites with a total mass of 1256.17 grams. The actual duration of the exploration was 6 hours and 28 minutes (excluding breaks). With the peak of emotion past, we go back to the hotel, exhausted by walking in the blazing sun, and we are very happy to find our beds.

This is the last day of prospecting. We push the boundaries of discovery to the north, west and east. The map of the area begins to look good. Among the notable discoveries of the day, Pierre-Marie finds an oriented specimen a few dozen meters from the car after a nice lunch break. Duration an exploration that lasts 5 hours and 39 minutes (excluding breaks), our team discovers yet another ten meteorites for a total mass of 994.66 g.

Meteorite hunting is a matter of method, but also luck. Passing to the right or left of a bush, one can easily miss a discovery. He should therefore not hesitate to search several times in the same place.

The end of the trip has come. We must go back to Tataouine for our last night in Tunisia. We take the next plane from Djerba the following day.

Thus ends our first real research campaign in the Beni M’hira strewn field with a very respectable score of 23 meteorites found for a total mass of 2623.83 grams in just two and a half days of exploration (i.e. 13 hours and 21 minutes of hunting and four people).

We have now produced a beautiful map of our finds. The distance between our northernmost discovery and the mass found by the shepherd is 4.46 km. We will return in January 2013 for further research.